As recently as last week, Stand Your Ground (SYG) laws were used to  States justify killing as self-defense. In Georgia, three young men were shot and killed in what is being called an attempted murder. In the most well-known SYG case, George Zimmerman claimed self-defense in the murder of Trayvon Martin in Florida in 2012.

Florida was one of the first states to pass Stand Your Ground or No Duty to Retreat legislation in 2005. SYG legislation then spread rapidly to many states throughout the country. Research shows a significant increase in murder rates in states with Stand Your Ground laws. Our research showed that SYG laws passed after Florida’s were not only similar in content, but almost textually identical from state to state. We investigated this phenomenon further in our recent Policy & Politics article entitled “The Role of Super Interest Groups in Public Policy Diffusion” 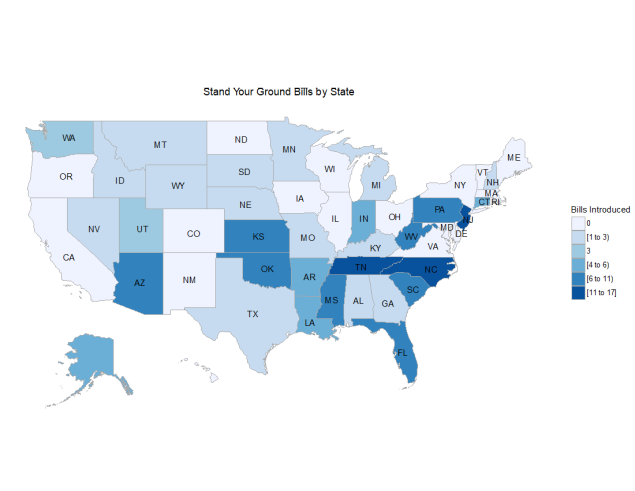 We contend that the growth of Stand Your Ground laws is due to the influence of a new type of super interest group — which we called sustained organisations. We conceptualise sustained organisations as a spiderweb of networks through which a central node organises the exchange of model legislation and money to the outer nodes, which typically include legislators and powerful corporations. Corporations push their interests and large sums of money into the central node of a super interest group, and model legislation is pushed out to legislators who then introduce pre-canned bills to their state. This often results in the rapid diffusion of specific policies throughout the country.

As it turned out, a powerful sustained organisation, the American Legislative Exchange Council (ALEC), stamped Florida’s SYG as ‘model’ legislation shortly after Governor Jeb Bush signed the bill into law. ALEC brought together corporate entities and legislators across the American states to craft model legislation then employed its vast network to promote bills around state legislatures. According to their website, ALEC claims nearly “one-quarter of the country’s state legislators and stakeholders from across the policy spectrum” in their membership. To capture ALEC’s influence, we used plagiarism software to compare ALEC’s SYG model bill against every single SYG bill introduced into the American states between 2005 – 2017. We found striking similarities.

To conduct our research, we collected 131 bills in total that dealt with “Stand Your Ground”, “No Duty to Retreat”, or “Castle Doctrine” and looked at the similarities between each one and the text of ALEC’s model legislation. Of the 131 bills, about a quarter lifted at least 30 percent of the state bill directly from ALEC’s model bill. The vast majority of the bills shared over 400 words in common with the model legislation. In one striking example, we found that West Virginia’s 2734 House Bill overlapped the model legislation by 849 words—which made the bill ~80% identical to the ALEC model. 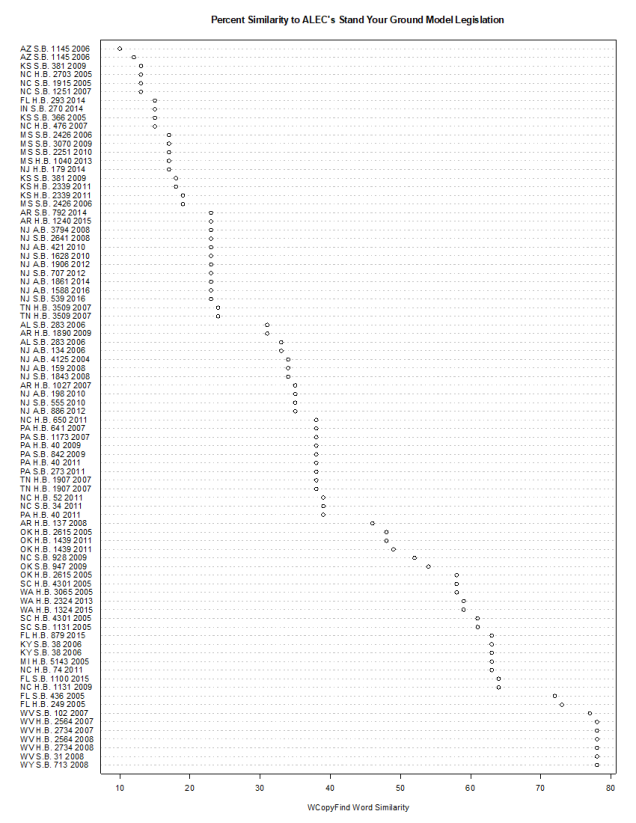 The importance of this research is to highlight the fact that this sort of policy diffusion is not only creating a more physically dangerous landscape in America, but a politically dangerous one as well. Groups such as ALEC pose major challenges to democracy by prioritising large, wealthy corporations above the interests and concerns of the general public. These large organisations essentially write up corporate-sponsored bills for lawmakers to introduce into their respective states. It’s through private meetings organised via the ALEC spiderweb that laws are stamped, only later to be implemented throughout the states—thus taking the focus away from the wants and needs of the electorate.

This blog post was originally published on the Discover Society blog  on  4 December 2019.

Why advocacy coalitions matter and practical insights about them

The effects of privatisation on the equity of public services: evidence from China