by Matt Flinders, Editor of Policy & Politics. This was originally posted on the Oxford University Press blog on 3rd September.

Since first posting it appears that the gap between the yes and no votes is narrowing, suggesting that a yes vote may not be so unlikely after all. Whether this means that Scottish citizens are now tending towards voting with their hearts rather than their heads is another matter. In any case, if you would like to comment, please do so below.

Is the UK really in danger of dis-uniting? The answer is ‘no’. But the more interesting answer is that the independence referendum is, to some extent, a red herring. The nationalists may well ‘lose’ the referendum but they have already ‘won’ the bigger political battle over power and money. All the main political parties in the UK have agreed give Scotland more powers and more financial competencies – or what is called ‘devo-max’ irrespective of what happens on 18 September.

Viewed from the other side of the world the Scottish independence referendum forms part of a colonial narrative that underpins a great deal of Australian life. Some commentators take great pleasure in forecasting ‘the death’ of the United Kingdom and the demise of the English. Michael Sexton’s headline in The Australian ‘Scotland chips away at the English empire’ is therefore high on hyperbole (dare I say, even colonial gloating) – ‘Irrespective of the result, the fact the referendum is being held at all underlines the decline of English culture and confidence across the past half century’ but sadly lacks any real understanding of British constitutional history and how it has consistently managed territorial tensions. The UK has long been a ‘union state’ rather than a unitary state. Each nation joined the union for different reasons and maintained distinctive institutions or cultural legacies. 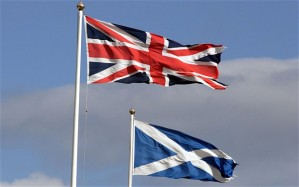 The relationships among and between the countries in the UK have changed many times. Like tectonic plates, the countries rub and grate against each other but through processes of conciliation and compromise (and the dominance of England) volcanic eruptions have been rare. In the late 1990s devolutionary pressures were channeled through the delegation of powers to the Northern Ireland Assembly, National Assembly for Wales and the Scottish Parliament. Different competencies reflected the extent of popular pressure within each country and since the millennium, with the exception of Northern Ireland, it is possible to trace the gradual devolution of more powers. Wales wants a Parliament, Scotland wants a stronger Parliament…but few people want independence from a Union that has arguably served them well.

But has the Union really served the Scots so well? It is true that the UK as a whole and not just Scotland has benefitted from the North Sea Oil revenues. ‘It’s Scotland’s oil!’ might have been the Scottish Nationalist Party’s slogan in the 1970s but it captures a sentiment that underpins today’s debates. It also overlooks the manner in which Scotland also receives a generous slice of the financial pie when public funds are allocated. Fees and charges for many public services that exist in England, Wales and Northern Ireland are absent north of the border. The nationalists argue that public services could be increased if Scotland had more control over North Sea Oil but they play down the fact that many analysts believe that the pool of black gold is nearly empty and that an independent country would have to take its share of the UK’s national debt. Depending upon how the debt-cake is cut this would be a figure around £150 billion. The simple fact is that independence is a risky game to play for a small state – the political equivalent of Russian roulette in an increasingly competitive and globalised world. There are lots of questions but few answers.

The UK Government claims Scots would be £1,400 better off if they stayed in the union, the Scottish government claims that they would be £1,000 better off with independence but the simple fact is that independence is a risky game to play for a small state – the political equivalent of Russian roulette in an increasingly competitive and globalised world. There are lots of questions but few answers. On independence would Scotland remain in the European Union? How would an independent Scotland defend itself? What currency would they use? What kind of international role and influence would an independent Scotland have? Would a ‘Yes Vote’ be good for business? What happens in relation to immigration and border controls? What would independence mean for energy markets? The simple fact is that there are no clear answers to these basic questions. The nationalists understandably define many of these questions as little more than ‘scare tactics’ but independence must come with a price.

Nationalists (such a tired and simplistic term in a world of multiple and overlapping loyalties) may argue that independence is about culture and identity, heart and soul  – not bureaucracies and budgets and I would not disagree. The problem is that when stood in the voting booth the Scottish public is likely to vote according to their head (and their wallet) and not their heart. The twist in the tail is that support for Scottish independence has at times been higher amongst the English (and that is 54 million people compared to just five million in Scotland) than the Scottish. Therefore if the referendum on Scottish independence was open to the whole of the UK, as many have argued it should be, Scotland may well have been cast adrift by its English neighbours.

And yet the strangest element of this whole Scottish independence debate is that the model of independence on offer has always been strangely lacking in terms of…how can I put it…independence. What’s on offer is a strange quasi-independence where the Scottish Government wants to share the pound sterling and the Bank of England, it wants to share the British army and other military forces and what this amounts to is a rather odd half-way house that is more like greater devolution within the Union rather than true independence as a self-standing nation state. The risks are therefore high but the benefits uncertain and this explains why the Scottish public remains to be convinced that the gamble is worth it. The latest polling figures find 57% against and 43% in support of a ‘yes’ vote but a shift to the ‘no’ camp can be expected as the referendum draws closer and the public becomes more risk averse.

But does this really matter?  A ‘yes vote’ was always incredibly unlikely. Mass public support has never existed and the referendum is really part of a deeper power game to lever more powers from London to Scotland and to this extent the game is already over. Devo-max has already been granted. The 2012 Scotland Act has already been passed and boosts the power of the Scottish Parliament by giving it a new ability to tax and borrow along with a number of new policy powers. (The most important new measure – giving the parliament partial control over setting income tax rates in Scotland will come into force in 2015.) Since this legislation was passed the three main political parties in Westminster have all agreed to devolve even more powers, specifically in relation to tax and welfare.

Mark Twain famously remarked that ‘reports of my death have been greatly exaggerated’ and I cannot help but feel the same is true in relation to those who like to trumpet the death of the United Kingdom. The Scottish independence referendum is highly unlikely to amount to a Dis-United Kingdom or the ‘unraveling’ of the union. It may amount to a ‘looser’ union but the relationship between Edinburgh and Westminster has always been one of partnership rather than domination. My sense is that what we are witnessing is not ‘the end’ as some commentators would like to see it but the beginning of a new stage in a historical journey that has already lasted over three hundred years.

Matthew Flinders is Distinguished Visiting Professor at Murdoch University, Western Australia, and Professor of Politics at the University of Sheffield in the United Kingdom. He will be giving the first of the British Library’s new ‘Enduring Ideas’ public lectures on Wednesday 26 November 2014 (18.30-20.00). His topic ‘The Problem with Democracy’ is sure to create conversation and debate. http://www.bl.uk/whatson/events/event164785.html.

2 thoughts on “The Dis-United Kingdom: Goodbye Scotland…or maybe not!”