In our second virtual issue of 2021, we focus on central-local relations and feature some of the latest research on that topic from a range of different perspectives and three quite different political systems. Against a backdrop of austerity coupled with an imminent global recession resulting from the pandemic, the politics of central-local relations and their impact on policy are, we believe, even more topical than ever. So we hope that you enjoy this short collection featuring some of our most recent scholarship on this theme. END_OF_DOCUMENT_TOKEN_TO_BE_REPLACED

While Policy & Politics has always tracked debates about the changing nature of welfare globally, our need to understand the implications of such changes is proving more crucial than ever during this global pandemic.  In particular, it is clear that this pandemic will have differentiated impacts, with those who are poorer and more vulnerable more likely to be adversely affected. To help think about how these challenges can be tackled, this special collection brings together a range of insights from recent articles that consider the changing nature of welfare and what this means for welfare recipients. END_OF_DOCUMENT_TOKEN_TO_BE_REPLACED

How can we identify the real impact of austerity on policy? Our recent article in Policy & Politics bridges the gaps between research on ‘cutback management’, ‘policy capacity’ and ‘policy dismantling’, finding that front-line and often short-term challenges are being prioritised over more hidden and medium-term threats. The results suggest a ticking time-bomb for discovering the real impacts of austerity – particularly in sectors such as the environment, where policymakers need to stay on top of scientific and societal developments in order to design effective approaches to problems. END_OF_DOCUMENT_TOKEN_TO_BE_REPLACED

The economic crisis has led to challenges across a whole host of policy areas. But what has been its effect on citizen participation in political decision making?

When we think about the pros and cons of citizen involvement in political decision-making, questions arise about competence and motivation. On the one hand, there is the question of the competence of citizens in making well-considered decisions. On the other hand, will politicians implement or ignore citizens’ proposals?  END_OF_DOCUMENT_TOKEN_TO_BE_REPLACED

The Bleddyn Davies Best Early Career prize has been awarded to: Madeleine Pill and Valeria Guarneros-Meza for their article on Local governance under austerity: hybrid organisations and hybrid officers

Social Impact Bonds (SIBs) are a social policy tool that claims to solve complex policy problems, such as homelessness, unemployment, and recidivism, through the scientific methods of financial modelling. Actively supported by several governments worldwide, SIBs provide a mechanism to turn the risky behaviours of vulnerable individuals into a form of profit making for private impact investors. SIB projects target population groups, such as the homeless, troubled youth, and obese, whose problems result in costly use of emergency-oriented public services such as shelters, prisons, and hospitals. In this way, SIBs are positioned as preventative, allowing future savings on costly public programs. These savings, also known as impacts, outcomes, or results are measured for their social value created (Dowling & Harvie, 2014). The SIB instrument places a current price on anticipated social value based on the assessed future risk that participants will not be reformed. Risks become a reward as investors bet on the extent to which vulnerable people will be transformed.

Social Impact Bonds (SIBs) are a new tool in the arsenal of neoliberal capitalism that might best be seen as an extension of public-private partnerships into the realm of social policy. As part of the pay-for-success movement, SIBs marketize social policy in ways that empower venture capitalists to profit from the misfortunes of others. The solution to difficult social problems has been cast with SIBs as a profiting from pain model.

The aim of our recent article in Policy & Politics entitled Austerity in the Making: Reconfiguring Social Policy through Social Impact Bonds is to identify future avenues for empirical research on SIBs to further assess how the tool reconfigures social policy and with what consequences for democracy and equity. END_OF_DOCUMENT_TOKEN_TO_BE_REPLACED

Adam Standring (Faculty of Social and Human Sciences in the New University of Lisbon, Portugal, FCSH-UNL)

It’s March 2011 and Portugal makes one of its infrequent visits to the pages of the international media.  Rising borrowing rates and pressure from the international financial markets, combined with an increasingly unpopular ruling party, make it increasingly likely that Portugal will become the next of the ‘profligate PIIGS’ to succumb to the contagion of the Eurozone Sovereign debt crisis.  Within four months the Troika will be called in and the country will embark on a harsh ‘Economic Adjustment Programme’ – economics-speak for the raft of austerity measures and structural reforms on which bailout packages are conditioned. END_OF_DOCUMENT_TOKEN_TO_BE_REPLACED

Welsh Government is phasing out its (former flagship) Communities First tackling poverty programme from 2017/18.  The Bevan Foundation, a think tank, has stressed that subsequent local action should be led by ‘community anchors’ – community-based organisations with a good track-record and strong community engagement. In a recent article published in Policy & Politics, we use the conceptual framework of hybridity – conducted as part of the Transgob project in Cardiff, Wales – to support this recommendation, and highlight the need for local government to relinquish its former levels of control to give these organisations space to develop approaches which work for their communities.

The research explored what austerity means for participation in city governance.  The optimistic view is that making governance more participatory can help overcome the hurdles of bureaucracy, with government ceding control to enable capacity to address complex problems.  The pessimistic view is that city governance remains dominated by state elites, with third sector and community partners co-opted to compensate for the decline in state provision, compromising their ability to advocate for and ensure that communities get decent services.  In Cardiff we uncovered attitudes and practices somewhere in between these two views.

We found that austerity had accelerated the city council’s use of its city governance structure, the Cardiff Partnership, to share the risk and responsibility of service delivery with other public organisations, but also with third sector organisations and neighbourhood-level community groups.  Communities were certainly having to take more responsibility for delivering their own (formerly public) services, such as play and youth services and the maintenance of parks, sports grounds and streets.  Those at the neighbourhood frontline faced tensions and power conflicts in trying to develop workable practice.

But we did find that community-based organisations had some room for manoeuvre in developing forms of co-production that were rooted in communities as well as responding to the strictures of funding cuts.  One example was timebanking, championed by a deprived community-based organisation in south Cardiff.  The approach means that volunteers can exchange equivalent hours of providing a service such as kids’ school holiday activities for other services.  The scheme was underpinned by the council offering access to facilities such as swimming pools, but the opportunities to spend credits earned within the community were expanding, indicating potential for it to become self-sustaining (and thus definitively community-led).  But it was too early in our research to tell whether attempts to replicate it will be successful. 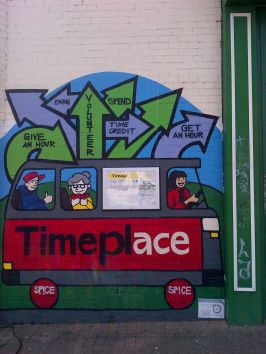 Credit: photograph taken by Madeleine Pill of the mural celebrating ‘Timeplace’, a community timebank running in the Cardiff neighbourhoods of Ely, Caerau, Fairwater and Pentrebane.  Timeplace is run by ACE (Action in Caerau & Ely) http://www.aceplace.org/timeplace/, a community-based organisation, in partnership with Spice,http://www.justaddspice.org/, a specialist timebanking non-profit organisation.

The city council was also seeking to transfer assets such as libraries and community centres to communities.  The frustrations of this process – such as the need for willing community groups to become formalised organisations – showed the need for change in the council’s attitudes to risk.  In the words of a Welsh Government officer, government needs to ‘recognise that the cheapest and best way to achieve real things is to spot what people are doing for themselves and support them’.

When the Communities First programme was reshaped in 2011, Cardiff Council innovated by contracting community-based organisations to manage the four deprived neighbourhood ‘clusters’ eligible for programme support. In so doing, the council downloaded risk and offloaded staff costs as the organisations took on responsibility for finance, HR and evaluation – thus becoming hybrid third-public sector organisations.  Their staff had to navigate the tensions and dilemmas of implementing a (national) programme, engaging in the (city-wide) strategy overseen by the Cardiff Partnership, and the needs and demands of their communities.  Doing this aligned with the demands of austerity, enrolling these community organisations into service delivery in ways that included voluntarism, thus increasing community self-reliance.  But we also found, to an extent, that community organisation staff were able to innovate (such as with timebanking) – and in ways that maintained their community-focused mission.

Therefore our Cardiff research shows how the ‘devolution, decentralisation and downloading’ of Peck’s (2012) ‘austerity urbanism’ encourages hybridity at a scalar, organisational and individual level.  But our research also reinforces the need to understand local practices to provide insight beyond the dualism of empowerment or incorporation.  The Cardiff experience of participatory governance demonstrates the potential for transformative alternatives in the everyday and the small-scale – and also highlights the need for state supports rather than constraints in these processes.   In the case of Wales, the need to sustain the work of community anchors should be a priority.

The ‘Transgob’ project analysed the discourse and practice of participatory urban governance under austerity in two British (Cardiff and Leicester) and four Spanish cities.  It was funded by the Spanish government’s National Research and Development Plan (reference CSO2012-32817).

If you enjoyed this blog post you may also like to read Community asset transfer in Northern Ireland by Brendan Murtagh.

I will be presenting a paper at the 2016 Social Policy Association Conference in Belfast in July. The paper looks at the impact of austerity on voluntary sector organisations campaigning and delivery of welfare services. Austerity has had a devastating impact on the most vulnerable people in society.

These are the people that voluntary sector organisations were often set up to represent and serve. Given this the paper asks whether voluntary sector organisations are, in the current period, complying with or resisting austerity. When we take a long historical view we see the repeated failure of the market, state and the voluntary sector to meet welfare need. We have moved from feudal obligations to the poor through the ideal of a universal welfare state to a mixed welfare model and now to austerity and the withdrawal of welfare. END_OF_DOCUMENT_TOKEN_TO_BE_REPLACED

May 2015 saw another election victory for the Conservative party in a UK general election, as they formed a majority government at Westminster. Many are concerned about the social equity issues arising from some of the policy decisions already announced, not least the £12 billion in welfare cuts announced in the July budget. However, as we suggest in our paper past research shows we should not be surprised about the direction policy is taking – Julian LeGrand’s work analysing the spending priorities implicit in the cuts meted out by the Thatcher government between 1979 and 1983 showed not only that they were focused on welfare, but that they protected “middle class” services such as education and health. These are also the services that Conservative voters were most likely to use. END_OF_DOCUMENT_TOKEN_TO_BE_REPLACED